14 Days Hassle-Free Exchange -
Online or in all Stores!

Product Protection Plans
for up to 6 Years!

Total amount of S$727,183 is its highest amount raised in 18 years of organising charity events 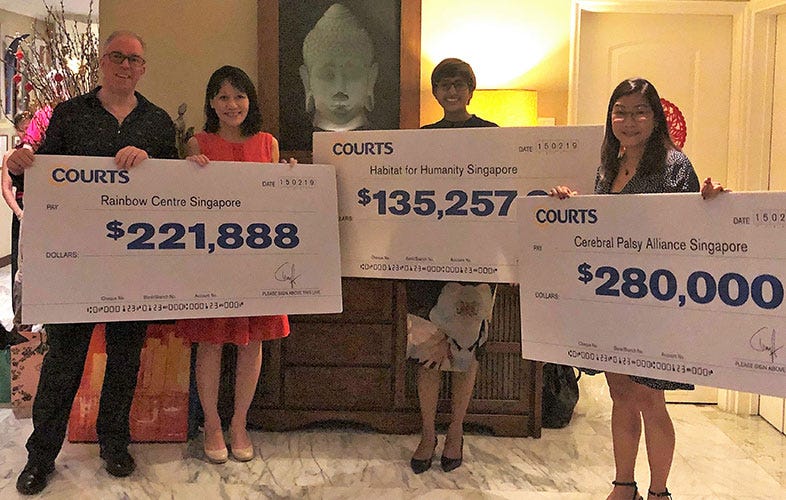 Singapore, 15 February 2019 – COURTS, the leading retailer of home electronics, IT and furniture products, continued its commitment to giving back to the Singaporean community this year by raising S$727,183 for three local charitable organisations, together with the help of family, friends and business partners. This is the largest amount raised through the company’s charitable endeavours to date and represents a milestone for the company’s CSR efforts. The funds raised through COURTS’ 2018 annual charity golf tournament went to Rainbow Centre Singapore, whilst funds raised through its 2018 annual charity party were donated to Cerebral Palsy Alliance Singapore and Habitat for Humanity Singapore.

With the Singapore Tote Board’s support as part of its 30th anniversary celebrations, the company was able to raise almost 25 per cent more collectively for its 2018 fundraising initiatives, compared with 2017 when it raised S$561,426.

Now in its 12th year, the COURTS Charity Golf Tournament was held on 7 September 2018 in aid of Rainbow Centre Singapore’s efforts to support children with autism and multiple disabilities through practical education, meaningful support and effective training programmes. The funds raised will go towards the building of their third campus at Admiralty Link, to serve up to 300 students with autism. With the support of 100 golfers, S$221,888 was raised for the organisation.

An additional S$415,257.60 was then raised for Cerebral Palsy Alliance Singapore and Habitat for Humanity Singapore from the COURTS and O’Connors & Friends Back to the 80s Charity Party. The annual themed charity party, in its 18th year, was held on 10 November 2018 at Keppel Club, where over 400 guests raised funds via table and ticket sales, raffle tickets and auctions, as well as pledges for a ‘Moment of Madness’ performance by COURTS Asia CEO, Mr Terry O’Connor.

The funds raised will go towards Cerebral Palsy Alliance’s efforts to provide individuals with cerebral palsy or multiple disabilities with early intervention, training and employment, including the provision of safe transportation for their clients to and from their learning and rehabilitation centres through the purchase of hydraulic buses, as well as their Home Management Programme, which serves clients who are bedbound and require home therapy. The funds will also go towards Habitat for Humanity’s local operations that enable intensive home cleaning sessions for low-income families, and vulnerable elderly and those living with disabilities to provide them with a safe and sanitary place to live.

Mr Terry O’Connor, Group CEO of COURTS Asia, presented the cheques this evening to representatives from all three charities. He shared: “It has always been part of COURTS’ culture to embrace giving back to the community who has supported us. With 2019 marking our 45th anniversary in Singapore, it is a joy and a privilege to be able to commemorate that by raising a milestone amount for local charitable causes. Since we started organising charity events 18 years ago, we are proud that we have supported over 25 local charities through these fundraising efforts – and more, through in-kind sponsorships and corporate volunteerism. This year, to augment and streamline our in-kind giving efforts under one brand, we launched our signature COURTS Charity Home programme, which will give home goods to the needy and vulnerable living in Singapore. We hope that these collective efforts will support the drive to create a more inclusive Singapore society.”

At the cheque presentation ceremony, COURTS announced its support as Presenting Sponsor for an upcoming charity project, Janice O’Connor’s debut cookbook titled Open Kitchen, which is officially launching in May 2019 and shares 100 recipes from varied Asian cuisines acquired over a decade of hosting charity dinners and events. A culinary project from the heart, Open Kitchen is a coffee-table book with 1,000 print copies, the sales and donation proceeds of which will go directly to Make-A-Wish Foundation Singapore.

COURTS’ CSR programmes aim to serve the underprivileged, vulnerable and needy within the local community. The company’s CSR efforts span varied areas and include staff volunteerism, corporate fundraising and donations of household items to needy communities. Its COURTS + O’Connors & Friends’ charity initiatives have collectively raised millions of dollars for local charities since 2001. The company also launched its signature COURTS Charity Home programme in 2019, its home donations programme for the vulnerable and low-income groups. In recognition of its corporate giving efforts, COURTS won Best CSR Efforts at the Singapore Retail Association Retail Awards in 2015. COURTS is also a Founding Member of the National Volunteer & Philanthropy Centre’s Company of Good initiative in 2016.

COURTS Asia Limited, the holding company for COURTS (Singapore) Pte Ltd, COURTS (Malaysia) Sdn Bhd and PT COURTS Retail Indonesia, has been listed on the Mainboard of the Singapore Exchange since October 2012.

With its roots as a furniture retailer from the UK, the COURTS brand was established in Singapore and Malaysia in 1974 and 1987 respectively, and it entered Indonesia in 2014. Today, COURTS is a leading retailer in Southeast Asia and has expanded its range to include electrical, IT and furniture products, introducing various store concepts such as Market Hall, Design Studio and GURU by COURTS. Constantly innovating to improve the shopping experience, the retailer continuously refreshes its stores to optimise the format, layout and merchandise mix.

In line with COURTS' mission to 'make aspirational home products easily affordable', the retailer abides by the COURTS Price Promise and is committed to offering competitive prices across its product range. In addition, COURTS Flexi-Scheme, its in-house credit, is available as one of the payment options.

Currently, COURTS operates more than 80 stores across three markets, spanning over 1.5 million sq. ft. of retail space. This includes the first Megastore pioneered in Singapore in 2006 as part of
the Economic Development Board's 'Warehouse Retail Scheme' to convert industrial land for commercial use.

We envision a world where persons with disabilities are empowered and thriving in inclusive communities. We work with our partners to create opportunities for persons with disabilities to make the most of their abilities and participate meaningfully in society. Through practical education, meaningful support and effective training programmes, we strive to increase the quality of life for them and their families. For more information, please visit http://www.rainbowcentre.org.sg.

Formerly known as Spastic Children’s Association of Singapore, the Cerebral Palsy Alliance Singapore (CPAS), was established in 1957 to provide persons with Cerebral Palsy and multiple disabilities with early intervention, special education, rehabilitation services, day activity centre programmes, vocational training and gainful employment in Singapore. At present, we look after over 700 clients ranging in age from a few months to 55 years old. Our vision is to empower all persons with Cerebral Palsy to realise their full potential and lead fulfilled, dignified lives. For more information, please visit http://www.cpas.org.sg.

About Habitat for Humanity Singapore

Habitat for Humanity Singapore is part of an international Christian housing charity that seeks to eliminate poverty housing worldwide. Convicted that safe and affordable housing provides a path out of poverty, we have been working alongside low-income communities to increase their access to improved living conditions. Since 2004, Habitat Singapore regularly sends volunteer teams to build decent and affordable houses across Asia-Pacific. Locally, we provide intensive home-cleaning for vulnerable individuals and families so they can have a safe & sanitary place to call home. For more information, please visit http://www.habitat.org.sg.

Compare
Clear all
You have no items to compare.